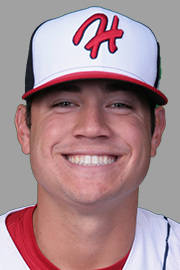 Tyler Freeman (SS) is the most exciting potential prospect.  Freeman who turns 20 in May is hitting .324/ .459/.959 with 8 steals in 9 attempts. He has more than twice as many walks (11) as strikeouts (5). Here is what I wrote about Freeman for the Hillcats preview.

Freeman won the batting title in the NY Penn League in 2018 for Mahoning Valley hitting .352 on the year.  Look for Freeman, who is a year younger than Nolan Jones, to follow a similar timeline in 2019 to Jones in 2018 and get promoted to Lynchburg for the last month of the season.  Freeman is likely to end up as a 2nd basemen.  He has only struck out 34 times in 398 at bats as a pro.  Freeman also led the NY Penn League in doubles which could translate into homers as he gets older.

Will Benson (OF) is repeating the year in the Midwest League.  He got a lot of attention by hitting 4 homers in one game on April 18th. Benson is hitting .313/.413/1.116 but is striking out 41.3 of the time and has a unsustainable .513 BABIP. Benson will turn 21 in June. Here is what I wrote about Benson for the Hillcats preview.

Will Benson is the ultimate puzzle for a hitting coach.  Benson looks like a tight end and has tremendous upside if he improves his hit tool.  The 14th overall pick in the 2016 draft, Benson is a true three outcome player.  Despite finishing the season with a .180 average with Lake County, he led the Midwest League with 22 homers and was 3rd with 82 walks.  Benson moves well and has a well above average arm.

Kris Bubic (SP) was the 40th overall pick in the 2018 draft out of Stanford.  He was pitching at the highest level in college and is likely too advance for the Sally League.  In 29 innings, Bubic was struck out 45 only allowing 16 hits with a 0.79 WHIP.  He is likely waiting on a spot to open in the Blue Rocks rotation.  Here is what I wrote about Bubic for the Blue Rocks preview.

Bubic was the fourth of the college quartet that the Royals drafted in 2018.  Bubic may have been worn out from the college season at Stanford.  The Royals assigned Bubic to Idaho Falls in the Pioneer League and he struggled with his control walking 19 in 38 innings.

Michael Gigliotti (CF) is coming back from a knee injury that cost him virtually all of 2018.  Gigliotti came out blazing but has cooled off.  He is hitting .270/.382/.787 with a perfect 10 for 10 on steals.  Gigliotti is already 23. Here is what I wrote about Gigliotti for the Blue Rocks preview.

Gigliotti had a promising start to his professional career in 2017, but lost virtually all of 2018 to an ACL injury. According to his twitter account, he has been cleared from rehab and is ready to go for 2019.

Zach Haake (SP) was yet another college pitcher from the 2018 draft.  Haake was a 6th round pick out of University of Kentucky.  So far in 2019 Haake has been outstanding with 36 strikeouts in 26 innings, allowing only 14 hits with a 0.88 WHIP.

Alex Scherff (SP) has gotten off to a very nice start for Greenville through 4 starts.  In 19 innings, Scherff has allowed only 12 hits with 19 strikeouts and a 1.05 WHIP. Scherff turned 21 in February.   Here is what I wrote about Scherff for the Salem preview.

Scherff was the 2017 Gatorade Texas High School Player of the Year but was not picked until the 5th round due to signability concerns and the Red Sox went well over slot to sign Scherff.  He had a up and down season for Greenville.  Scherff could be promoted to Salem in 2019 if he shows improvement in Greenville.

Grayson Rodriguez (SP) was the Orioles 2018 1st round pick has turned a lot of heads in his 3 starts and shot up prospect ranking.  In 16.2 innings, Rodriguez has allowed 1 earned run, struck out 28, allowingd 7 hits and has a 0.78 WHIP. He has reportedly added a plus change up that has been a difference maker.

Blaine Knight (SP) was the Orioles 2018 3rd round pick in 2018.  Knight was a very accomplished college pitcher at Arkansas that is probably too advanced for the Sally League.  Knight is a tall slender righthander, who in 4 starts has thrown 20.2 innings with 26 strikeouts, allowing only 8 hits and a 0.58 WHIP. He seemingly just needs an opening in the Keys rotation.

Adley Rutschman (C) It is unusual to list a player that is not in the organization.  However, the Orioles have the 1st pick in the MLB draft and Rutschman is the consensus top ranked player.  Assuming Rutschman is the Orioles choice it is likely that he will finish the year in Frederick.  Rutchman is probably a top 25 prospect in baseball the day he signs.  At Oregon State, Rutchman has 14 homers and is hitting .431/.577/1.387  in 41 games.

Ofelky Peralta (P) struggled in Frederick in 2017 and 2018. Under the Orioles new regime, he was assigned to Delmarva this year where he has been dominant. Peralta is still only 22.  In 14.2 innings, Peralta has 28 strikeouts, allowing 9 hits and a 0.95 WHIP.  Peralta is striking out 48.3% of batters. He seems to a prime candidate to be a multi-inning reliever.

Adam Hall (2B-SS)  may be a year away from Frederick but has gotten off to a good start with Delmarva hitting .361/.453/.883.  Hall turns 20 in May. Here is what I wrote about Hall for the Frederick preview.

A 2nd round draft pick in 2017, Hall is originally from Bermuda and went to high school in Canada. Hall had less baseball experience than a typical high draft pick.  The speedy got better as the season went on in 2018 in Aberdeen and will open 2019 in Delmarva.

Robert Neustrom (RF) was the Orioles 5th round draft pick in 2018 out of Iowa.  Neustrom has gotten off to a good start with Delmarva hitting .309/.415/.929 with 3 homers. With Zach Jarrett promoted to Bowie, Neustrom will likely be up in Frederick soon.

Tim Cate (SP) is another advanced college pitcher that  is pitching very well in the Sally League.  Cate has thrown 27.1 innings with 31 strikeouts, allowing 16 hits with a 0.95 WHIP.  Here is what I wrote about Cate for the Potomac preview.

Cate is an undersized, crafty left hander who was the 65th pick in the 2018 draft.  At UCONN, Cate struck out 270 hitters in 209 innings primarily due to a very good curve ball.  He did  miss some time in 2018 with arm issues and struggled in 52 innings as a pro with Auburn in the NY Penn League and Hagerstown in the Sally League. Cate appears to be fully healthy in spring training.
Gilbert Lara (3B) was traded with JT Harrison by the Brewers for Gio Gonzalez to the Nationals. Lara is hitting .322/.351/.881 for Hagerstown.  Lara is 21 years old and spent all of 2018 in Midwest League. Lara upside is limited because he does not have much power or speed and does not walk much.  However, he should be ready to move up a level.

These are interesting prospects that have increased their stock in the first month of the season If you are in a deep dynasty league, these are potential pick ups.

Enoli Paredes (P) is an undersized righthander for Fayetteville that has shown the ability to miss bats. Paredes split 2017 between Quad City and Buies Creek striking out 90 batters in 69 hitters.  So far in 2019, Paredes has struck out 22 in 15.1 innings, allowing only 6 hits with batting average against him is .115.  Paredes has walked 11 batters. Paredes is 23 and looks like a future multi-inning reliever for the Astros.

Parker Mushinski (P) is another impressive, under the radar pitching prospect for the Astros.  Mushinski was a 2017 7th round pick out of Texas Tech.  The southpaw was very good for Quad Cities in 2018 as a spot starter or multi-inning reliever striking out 30.2% of batters and hitter only hit .189 against him.  So far this year, Mushinski is striking 36.1% of batters versus a 6% walk percentage.  He is 23 years old.

Bryan De La Cruz (RF) is an outfielder for Fayetteville that is hitting .346/.402/.992.  The most exciting aspect of De La Cruz' start is that his power is starting to emerge. De La Cruz leads the Carolina League with 9 doubles and he also has 2 triples and 2 homers.  De La Cruz' 13 extra base hits is second only to Luis Robert.  De La Cruz is 22 years old.

Noah Zavolas (SP) was the Brewers 18th round pick in 2018 out of Harvard.  In 4 starts, Zavolas has pitched 5, 5, 6, and 7 innings while never giving up more than 2 runs.  Zavolas has seemingly gotten better the last outings,striking out 15 while only allowing 7 hits.  Zavolas will turn 23 in May and is someone to keep an eye on.

Jason Bahr (SP) is likely ready to move up to AA Frisco.  Bahr has pitched 21.1 innings, allowing just 9 hits and striking out 21.  Here is what I wrote about Bahr for the Wood Ducks preview

Bahr was a 2017 5th round draft pick out of Central Florida.  Bahr was really good with the Giants for the first couple of month of 2018 with the Giants at Augusta in the Sally League and was promoted to San Jose in the Cal League where he had three strong starts.   In July, Bahr was traded along with Austin Jackson and Cody Gearin to the Rangers for cash in an odd deal.

The Rangers made it clear that Bahr was the guy they wanted. https://www.mlb.com/news/rangers-trade-for-jason-bahr-austin-jackson/c-284808556.

Bahr was up and down with the Wood Ducks so it is possible he will be assigned back to the Down East to begin the 2019 season.

Cody Sedlock (SP) was actually the Orioles top prospect according to MLB in 2016.  For the first time in a couple years he is healthy and proving that his skills have not diminished.  In 21.2 innings, he has allowed 12 hits and struck out 20.  Sedlock will turn 24 in June and could be in line for a promotion will a few more strong outings.

Drew Rasmussen (SP) is coming back from his second Tommy John surgery and still building up his arm with appearances of less than 50 pitches. He is throwing in the mid to upper 90s.  In 8.2 innings for the Mudcats, he has allowed 6 hits and only 1 walk while striking out 13.

This is through April 27th. There are a few isolated games not included because the pitch count was unavailable affecting  Blake Battenfield (4-17),Kyle Johnston (4-21) and Malvin Pena (4-20).

The young position prospects that we have been focusing on continue their difficult adjustment to the Carolina League.  With Bubba Thompson's injury, the list is down to 5.  Since the last update, the group hit were a combined 14 for 92 for a .152 average although MJ Melendez and Tristen Lutz showed some signs of life. Honorary young buck, Oscar Gonzalez is now up to 89 at bats without a walk.